Human element is focus for Keller at Cascade 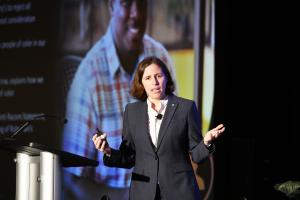 Naples, Fla. — Christina Keller sees the value of people in her first year at the helm of Cascade Engineering Inc.

"A lot of people are looking for an opportunity, but sometimes they can't even get in the door," Keller said March 5 in a Keynote Address at the Plastics News Executive Forum in Naples.

Grand Rapids, Mich.-based Cascade, an injection molding firm, has successfully hired people who are moving from welfare and others who have criminal records. The firm, founded by Christina's father Fred in 1973, helps these employees overcome obstacles like transportation and child care in order for them to become productive workers.

These and other programs will be needed to fill a future need for manufacturing jobs, Christina Keller said.

"Manufacturing jobs can be hard to fill because of the negative perception of both manufacturing and of plastics," she added. "Millennials are becoming the majority [of the work force], so we need to court them and tap into other talent pools."

Keller also said that investors and customers need to work together to create sustainable corporations.

Cascade has been active in several forms of advanced technology, including sensor technology and 3D printing. Keller said that technology needs to be approached in the right ways.

Cascade employs 1,900 people at 13 facilities. The firm won the Plastics News Processor of the Year award in 2001. Christina Keller joined Cascade in 2009 and became CEO in September. She worked in management consulting before joining the family business.

The company ranked No. 23 in the most recent Plastics News survey of North American injection molders, with estimated sales of $360 million.