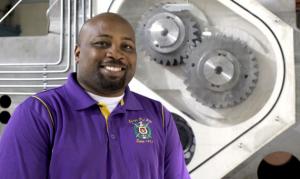 In his new position, Brame will remain CAO and continue overseeing the Services group, which includes legal/risk management, human resources, marketing, IT, and several other key departments. His additional responsibilities include managing the following business units: Decade, Xtreme RFID, Cascade Consulting Group, and Triple Quest. He will also continue his role as a member of the Office of the President and report to Mark Miller, President of Cascade Engineering.

Brame joined CE in 2006 and has been crucial in leading several of CE’s Employer of Choice initiatives including B Corp certification and a Full Partner designation from the Partners for a Racism-Free Community. Prior to joining CE he was the Senior Vice President for Operations and Merchandising at Sysco Food Services of Grand Rapids, LLC and served as a practicing attorney for Miller, Johnson, Snell & Cumminsky, P.L.C. He has also served as an adjunct professor at Thomas M. Cooley Law School.

“Kenyatta represents everything we look for in a leader at Cascade Engineering – insightful, dedicated and genuinely concerned about the welfare of all of our employees. He also understands the importance of People as related to our triple bottom line philosophy,” said Fred Keller, Chair and CEO. “He has been instrumental in our “B” Corporation certification and the development of our anti-racism statement, to name just a few of his many accomplishments.”

“I continue to be impressed by Kenyatta’s ability to balance our ‘people, profit, planet’ philosophy,” said Miller. “Through his leadership, he has demonstrated that a true commitment to each of these tenents allows them to build off each other, resulting in a greater overall impact.”

Brame and his wife, Tracy, are the co-founders of the Tipping Point Initiative, a nonprofit focused on creating opportunities and eliminating barriers to education and employment. In partnership with the Omega Psi Phi Service Fraternity, Brame recently established a Boy Scout Troop and Cub Scout Pack serving inner city youth. His extensive community affiliations include serving as a board member of Frederik Meijer Gardens and Sculpture Park; Wabash College Alumni Association, Spectrum Health’s Healthier Communities and Nuestros Pequeños Hermanos, an orphanage located in Tegucigalpa, Honduras.

“I am honorod to be part of an organization that cares equally about our people, the planet and our operational success. This Triple Bottom Line philosophy drives our innovation and creates an environment in which people can thrive,” said Brame. “I am very excited about the future of Cascade Engineering and eager to do anything I can to assure our continued success.”