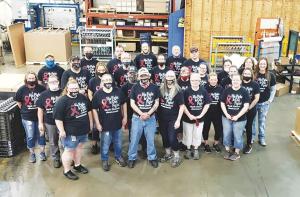 Sometimes a job is just a job. But sometimes, coworkers become like family and rally around each other in times of need.

Seven years ago, Dan Lamneck was diagnosed with stage III larynx cancer. Employed for the past 14 years at CK Technologies in Montpelier, Lamneck went through a regimen of chemotherapy and radiation and was cancer free for five years.

It was during that first bout of cancer that some of his coworkers in quality control and machine operations came together for a fundraising dinner, with CK providing matching funds that were donated to Dan and his wife Dorcus, who also works at CK.

But two years ago, Dan found out his cancer had returned, and this time it was in his neck, leading to six months of chemotherapy — along with Keytruda, an immunotherapy that works with the body’s immune system to help fight cancer. Then last September, it was discovered the cancer had spread throughout his neck and a tumor had wrapped around his carotid artery, which is considered a stage IVB disease with a serious prognosis.

“When we got that diagnosis, he was told that the only thing that he was able to do was a clinical trial,” Dorcus said. Dan has enrolled in a clinical trial at an Ann Arbor, Michigan, medical facility since last November and has had some success, as the tumors have begun to shrink, Dorcus said last week.

Dan said he’s continued to work as much as he’s able, but he’s been forced to miss some work due to travel time to Ann Arbor to participate in the clinical trial, or due to exhaustion from the effects of the treatment.

But the bills still come in, said coworker Brenda Tomaszweski, who, with coworker Katelynn Roehrs, came up with another fundraising idea for the Lamnecks — a T-shirt and face mask drive.

They asked Bailey Green of Bella’s Custom Creations if she could help, “and she agreed to make the shirts and masks at cost,” said Tomaszewski, adding that CK again agreed to match what the employees raised.

Importantly, Tomaszewski said the masks and black T-shirts were emblazoned with a message of support to the Lamnecks from their coworkers. The message reads: His Fight is Our Fight — Neck Cancer Awareness.

“It’s a wonderful team of employees that have come together to help out a coworker in need. They’re like family. We just wanted to show our support,” Tomaszewski said.

For her part, Roehrs had a special reason for helping the Lamnecks — she is marrying Dorcus’ son, Daniel, on May 22.

The Lamnecks said they were overwhelmed and appreciative of the support, both emotional and financial.

“It’s just amazing ... I can’t even put it into words. We feel so grateful for the support they’ve given us,” said Dorcus. “We’ve both had to take time off, and when you take time off, you don’t get paid, so this helps.

“Now we don’t have to worry about bills for a while,” she said. But besides Dan’s health issues, she’s had to deal with the deaths of six family members in the past two years.

“I’ve found out life is short sometimes,” she said.

For his part, Dan said he has “good days and bad days” but continues to work as often as possible. “It’s like my own therapy,” he said with a laugh, adding the gesture from his coworkers has lifted his spirits and he’s feeling better recently.

Dorcus has noticed. “Dan is getting his old spunk back,” she said, smiling.