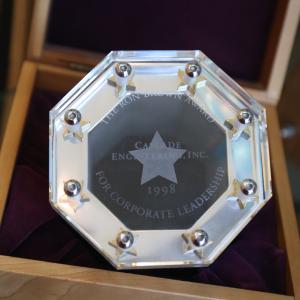 The Ron Brown Award received by Fred Keller in 1998.

Cascade was honored for its ability to help employees balance the often conflicting demands of work and family at various stages of their lives. Cascade Engineering has formalized this approach in a program called P.H.A.S.E.S (Providing Health, Activities, Safety, Enrichment Services). The program offers employees a variety of personal development programs, and helps them become more responsible for their communities.

"The P.H.A.S.E.S program is really a result of our corporate culture," Keller said. "The people who work here are, first and foremost, people who have needs and ambitions. I believe fundamentally in the concept of building trust throughout the organization as a foundation. It is essential that people are as free as possible of the hassles of daily life. Toward that end, we have developed over the years many initiatives to help employees balance work and family. P.H.A.S.E.S. formalizes the initiatives into a program with that very objective."

The Ron Brown Award for Corporate Leadership is the first Presidential award to honor companies for the exemplary quality of their relationships with employees and communities. The annual award is presented to companies that have demonstrated a deep commitment to innovative initiatives that not only empower employees and communities but also advance strategic business interests.

"As a privately held company we have the privilege of thinking longer-term than most public companies, and we often talk among ourselves about why we are in business. We talk about achieving worthy goals, about as much as we discuss return on investment. It is a very worthy goal to make Cascade a company where people want to contribute, where they feel their contributions are appreciated, where they can spread their wings and really do that which they have a yearning in their heart to do," Keller said. "The P.H.A.S.E.S. program is designed to provide that kind of opportunity."

Cascade Engineering is a leading injection molder of systems and components for the automotive, furniture and container industries. The company has an unswerving determination to achieve worthy goals. The Cascade Engineering Family of Companies, which employs more than 1,100 people, reported 1999 revenues of $185 million.

The Ron Brown Award is the latest for Cascade in a series of honors. In 1997, Cascade was presented with Chrysler Corporation's Role Model for Technology Award, which had previously gone to multibillion-dollar international companies Robert Bosch and Nippondenso. In 1998, Cascade was named Manufacturer of the Year for the state of Michigan.

"During our 25 year history we have been working at developing principles that make a difference in the lives of our employees and in the community,” Keller said. “This honor not only validates those efforts, but also demonstrates that mid-size companies can provide effective leadership in the pursuit of worthy goals for not only their own business and the business community, but also for their local communities.

“Manufacturers have been under tremendous pressure to improve quality while reducing costs. This has been a significant contributor to the improved economy of late. We have had to learn how to solve complex problems while continuing to grow. We have learned a great deal in manufacturing about how to solve business problems. Now is the time for leading companies to help the people of our communities benefit from those lessons in order to truly impact people's lives for the better.”

Keller and Cascade Engineering are no strangers to Executive Office accolades. In 1997, Cascade Engineering was honored by Vice President Gore for its leadership programs promoting awareness and treatment of domestic violence. In 1989, President George Bush named daughter Lorissa Keller the 168th Point of Light for her work in starting a volunteer program at her high school.